Today is the feast of the Fransican St Bonaventure.

He was born in 1221 in the Lazio region of central Italy.  At the age of 22 he entered the Franscian order, he went to Paris for the his studies along with St Thomas Aquinas. He was regarded as a great scholar. Due to this and other matters, at the age of 35 he was elected as Superior of the order. This proved a great moment, as the order had been riven by dissension, splits and other issues. He was able to restore peace to the Order, so that they could carry on the charism of St Francis. Due to this  the Pope asked him be Archbishop of York, which he turned down. Instead, a few years later he was made a Cardinal and Bishop of Albano and member of Pope Gregory X's inner circle.

Above all he is remembered as a man who could combine great learning with prayerfulness and humility. 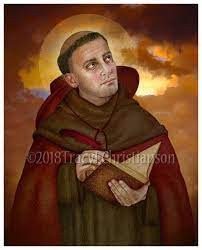 No comments made yet. Be the first to submit a comment

By accepting you will be accessing a service provided by a third-party external to https://www.carlislecatholicchurch.org/